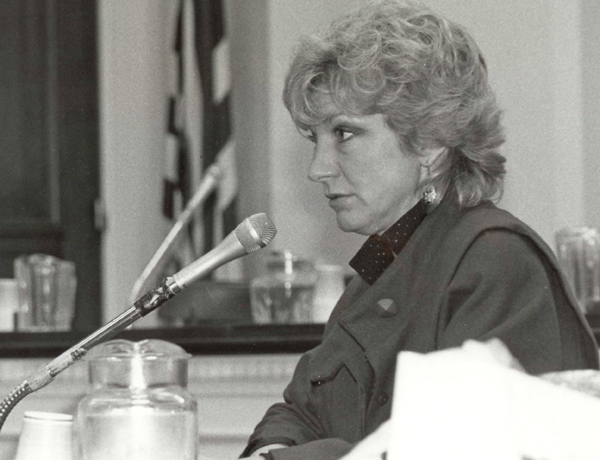 Karen Parker is a San Francisco based attorney who practices human rights and humanitarian law fulltime. She is responsible, in part, for the evolution of international law in such areas as economic sanctions, weaponry, environment as a human right, and the rights of the disabled. She also consults and serves as an expert witness in legal disputes involving the application of armed conflict law. In 1982, she founded the Association of Humanitarian Lawyers (originally incorporated as International Disability Law), and has served as its president for over twenty years. In addition, she is the chief delegate for International Educational Development - Humanitarian Law Project, a nongovernmental organization (NGO) accredited by the United Nations Economic and Social Council (ECOSOC). She has also represented or served as a consulting attorney for Disabled Peoples International, Human Rights Advocates, and the Sierra Club Legal Defense Fund.

Ms. Parker received her J.D. degree with honors from the University of San Francisco Law School in 1983. She interned at the Inter-American Commission on Human Rights of the Organization of American States, and externed for California Supreme Court Justice Frank Newman, a close friend until his death in 1996.

Today, she testifies regularly at the U.N. Commission on Human Rights in Geneva (recently renamed the Human Rights Council) and its Sub-Commission on the Prevention of Discrimination and Protection of Minorities. She is also a recognized expert on the application of humanitarian law with regard to Depleted Uranium (DU) and the application of the Geneva Conventions and Hague Conventions concerning armed conflicts

Her legal arguments on a variety of issues and conflicts are regularly cited by U.N. officials in their reports and included in the final drafts of resolutions adopted by the Commission on Human Rights. In 2000, she worked closely with the U.N. Special Rapporteur on Sanctions in developing a six-prong test to determine if a trade embargo and other economic sanctions violate human rights and humanitarian law, and on the report as a whole (E/CN.4/Sub.2/2000/33) PDF. She has also nominated and worked closely with U.N. officials appointed to report to the commission on disability, the environment, terrorism (E/CN.4/Sub.2/2001/31) PDF, toxic dumping and weaponry, and the human rights situation in specific countries.

In the case of depleted uranium, in 2001, Ms. Parker and her colleagues lobbied successfully for the appointment of a special rapporteur on the legality and use of this material during the annual session of the Subcommission on the Prevention of Discrimination Against Minorities. She initiatlly prepared a report and conference statement on this subject and later filed a lawsuit at the Organization of American States Inter-American Commission on Human Rights..

In the mid-1990's, Ms. Parker's legal arguments on the subject of war rape were incorporated into a landmark civil case filed in a Japanese court. The case, still in litigation, calls for compensation of the Comfort Women, survivors of a massive war rape and prostitution scheme conducted by Japan during World War II . An estimated 200,000 girls and women were held against their will, half of them dying from starvation and other injuries sustained while imprisoned.

She was one of the first NGO representatives to assemble a multi-racial, multi-national delegation to appear in Geneva, and regularly assists local and indigenous human rights monitors in gaining access to the international forums. This affords them the opportunity to testify firsthand on resolutions that pertain to their homelands.

Ms. Parker is bilingual English/Spanish and also speaks French and Italian. A native of Rochester, New York, she is a former classical musician and educator, and the daughter of trumpeter Sidney Mear, who played for the Rochester Philharmonic. She is gifted speaker who regularly conducts seminars for law students, congressional representatives and human rights professionals.

During the civil war in El Salvador in the 1980's, Ms. Parker participated in several investigative delegations to the country and presented testimony to the U.N. Commission on Human Rights regarding humanitarian law violations. These violations included the absence of POW's held by the government after years of war, interference with humanitarian relief, the targetting of civilians during air assaults, and the United States's failure to respect the principle of non-refoulement, which precludes returning refugees back to a country where grave breaches of humanitarian law are taking place.

In 1985, the Humanitarian Law Project received a tip that one of the Salvadoran rebel commanders, Nidia Diaz, had been captured. Ms. Parker flew to the capitol and negotiated her way into the prison, where she found Diaz suffering from four bullet wounds. Surgery was arranged and conducted a short time later by a specialist from Mexico. (The event was widely publicized due to the operating room assistance of actor Mike Farrell). Diaz was eventually released in a prisoner exchange, and after a U.N. mediated resolution to the war, went on to become a member of the national legislature.

Ms. Parker's arguments on the application of the Geneva Conventions and other law were used in the Deconcini-Moakley Bill to halt the deportation of Salvadoran and Guatemalan refugees from the United States. In addition, her expert testimony during a 1988 trial of sanctuary workers in New Mexico led to their acquittal.

Ms. Parker has served as an intermediary between the opposition LTTE army of the Tamil people and the government. The conflict has been a controversial one, in part because the United States is interested in wresting control of the strategic Trincomalee Harbor away from the Tamils. Some human rights organizations have tended to support the U.S. position without considering the conflict from the perspective of the Tamils historic independence in the region (i.e. prior to the colonial era). Under the principle of Self Determination, this ethnic group has legal standing for their claim to an independent homeland.

Ms. Parker has facilitated extensive discussions with both sides about their obligations under the Geneva Conventions and human rights law, with the goal of bringing the conflict to an equitable resolution. She has also addressed human rights forums in the United Kingdom, France, Canada, the United States and Australia, and presented various reports and statements.

Beginning in 1989-90, civil disturbances erupted on a large scale in Kashmir, illegally siezed by India in 1947. After dispatching several human rights monitors to conduct a long-term investigation, Ms. Parker wrote a legal analysis on The Situation in Kashmir, published by the U.N. Subcommission. This was the first time the issue of Kashmir had been raised internationally in nearly twenty years. She presented several briefing papers and statements to the commission in the years following, and met with then Prime Minister Benazir Bhutto of Pakistan to discuss pertinent legal issues.

Ms. Parker petitioned the newly created U.N. Working Group on Detention in 1991 on behalf of the relatives of Aung San Suu Kyi, the revered opposition leader in Burma and winner of the Nobel Prize. In response, the U.N. group ruled that Daw Suu Kyi's detention by military authorities was in fact arbitrary. Further U.N. activity and a groundswell of international public support finally led to the activist's release in 1993.

Ms. Parker has facilitated the diplomatic effort by the resistance movement of the Karenni people, who she has helped gain access to international forums as well as the United States Congress.

In 1984, Pakistan's General Zia-ul-Haq effected a discriminatory ordinance banning the Ahmadi sect of Islam. Ms. Parker's work on behalf of the outlawed Ahmadi Muslims resulted in the condemnation of Pakistan by the United Nations in 1985 for its denial of human rights based on religious belief. She also laid the groundwork for the granting of asylum to Ahmadis who have fled to other countries. In 1986, Ms. Parker argued with the general for two hours at his army headquarters about the illegality of state-sanctioned discrimination, under both international law and Pakistan's own constitution.

In 1993, when the Pakistani Supreme Court upheld the ordinance, Ms. Parker wrote a legal commentary which became the basis for asylum claims by Ahmadis in the United States.

Environment as a Human Right

In 1989, Ms. Parker began consulting with the Sierra Club Legal Defense Fund on an initiative to incorporate the right to a sound environment into human rights law. The Universal Declaration guarantees a "right to life", a "right to food", and a "right to health", all of which can be severely impaired by avoidable ecological destruction. A country's right to self-determination is also at risk when another country wreaks havoc on its natural resources, a scenario realized in China's clearcutting of Tibetan forestlands.

She drafted the resolution which was adopted by the Sub-Commission in 1989, appointing an Algerian woman,Fatima Ksentini, to serve as "Special Rapporteur on Human Rights and the Environment". Ms. Ksentini submitted her report in 1994, which contained many of the arguments that Ms. Parker and the Sierra Club Legal Defense Fund had developed.

In her report, Mme. Ksentini called for a meeting to bring together special rapporteurs in such areas as housing and displaced people, officials from the World Health Organization, and leading NGO representatives to discuss a U.N. resolution on "Principles for Human Rights and the Environment". The Commission later appointed a Special Rapporteur on Toxics, electing Ms. Ksentini once again. She presented her first report at the 52nd session in April, 1996.

In 1982, Ms. Parker initiated a resolution at the U.N. Sub-Commission that started a process for addressing human rights and disability. She recommended an Argentinean, Leandro Despouy, to serve as Special Rapporteur on Disability, and after his election in 1984, worked closely with him until his final report was presented in 1991.

Ms. Parker subsequently participated with the U.N. working group which prepared the text for a new U.N. instrument entitled "Principles of Mental Health Care", issued in 1991 as General Assembly Resolution 46/119. This was followed in 1993 by another instrument, entitled "Equalization of Opportunities for Disabled People" (Gen. Assem. 48/96), providing further articulation of rights for persons with disabilities.

In 1983, Ms. Parker filed a successful suit against the United States at the O.A.S. Inter-American Commission on Human Rights on behalf of the victims of Grenada's mental hospital, bombed by U.S. forces in 1983.

Following the U.S. invasion of Panama, the Center for Constitutional Rights (CCR) reintroduced her arguments in a similar petition. This one charged the United States with violations of human rights law and the Geneva Conventions during its invasion of Panama in 1989. Four to six thousand civilian casualties were reported.

Ms. Parker's Grenada case represents the first time any intenational human rights forum had admitted an action against the United States, the commission finding prima facie evidence that the alleged crimes had in fact occurred. She submitted an amicus curiae brief in support of the CCR petition regarding Panama.

For document listings, refer to the Association of Humanitarian Lawyers home page.